Reconstruction of the Jiul passage in Timișoara 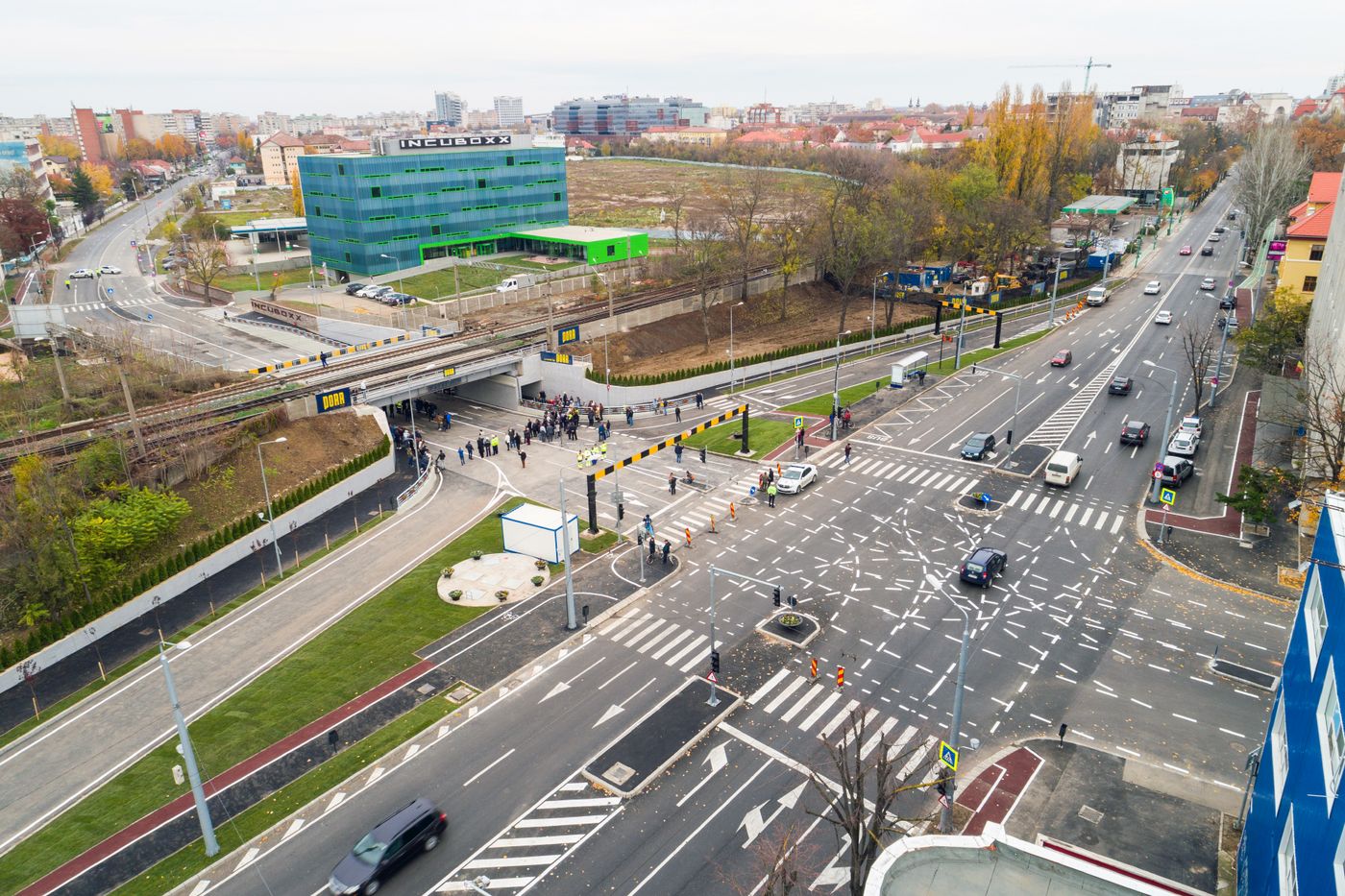 Exceptional transformation of a bridge.

Passage Jiul is an important interchange to the west of the city centre of Timișoara. The existing railway bridge was too short for the growing volume of traffic. Therefore, the municipality of Timișoara decided to rebuild and enlarge the overpass including the bridge. PORR Construct S.R.L. was assigned the construction of the new passage on 31 March 2016.

A key factor in the rehabilitation was keeping up rail and road traffic during construction – with as few and as short closures as possible. The client decided that an unconventional method called “box jacking” be used. One abutment of the new bridge was built next to the existing railway dam and afterwards pressed through the dam with hydraulic presses, with railway traffic in service all the time. Afterwards, the new bridge elements were lifted into the final position during short closures.

The existing 12.6m steel structure railway bridge was part of the railway route between the stations Timișoara East and Timișoara North. It consisted of three decks, one for each railway track on the route. One existing abutment was used for the new bridge, therefore it had to be strengthened and rehabilitated. 35 micro piles and 350 anchors were set up to guarantee a safe connection between the attached wall and the old abutment.

Box jacking – the art of pushing an abutment through the railway dam.
The second abutment, planned as a passage for pedestrians and bicyclists, was executed with a special technique called “box jacking”. This is the horizontal movement of a prefabricated concrete culvert through the ground, usually underneath an existing road or railway, in order not to disturb the road or railway traffic. The method is used seldomly but was chosen because the installation of a bridge was not possible, due to the fact the emplacement of the line was in curve.

The finalised passage, measuring 5.85 x 4.3 x 16.5m and with a weight of 550t, was additionally post-stressed in all directions. A mixed steel and concrete shield was placed on the front side of the passage in order to secure the embankment from the top and to decrease the friction during the pushing. Eight hydraulic presses with a total compression force of 24,000kN were installed on the back side of the passage, ensuring the pushing. In order to remove friction, additional steel sheets ensured a separation between the ground and the passage. After lifting the old bridge deck during a short total traffic closure, the top of the passage was excavated and the bearings were mounted. At the same time the old abutment was dismantled.

The new bridge decks were designed as composite bridges and precast on the construction site. After finishing the bearings, one of the three 115t decks was lifted into the final position. The railway tracks had to be closed for three hours only. As soon as the new railway track was mounted, railway traffic was opened and work on the next bridge deck could begin.

Like the old one, the new 19m long bridge consists of three separate bridge decks. It was executed as a trough bridge with composite construction technique. All bridge decks were finalised next to the old bridge and afterwards lifted into their ultimate location. Finally, the roads were adapted to the new situation.

A special finishing feature was the installation of a road surface heating device integrated in the concrete road structure to keep the passage free from snow and ice all year. With this wide-ranging and highly challenging project, PORR could demonstrate once more its technical expertise and know-how.

In the Jiului overpass project, PORR applied unconventional techniques like “box jacking” and used one abutment of the old bridge for the new one. 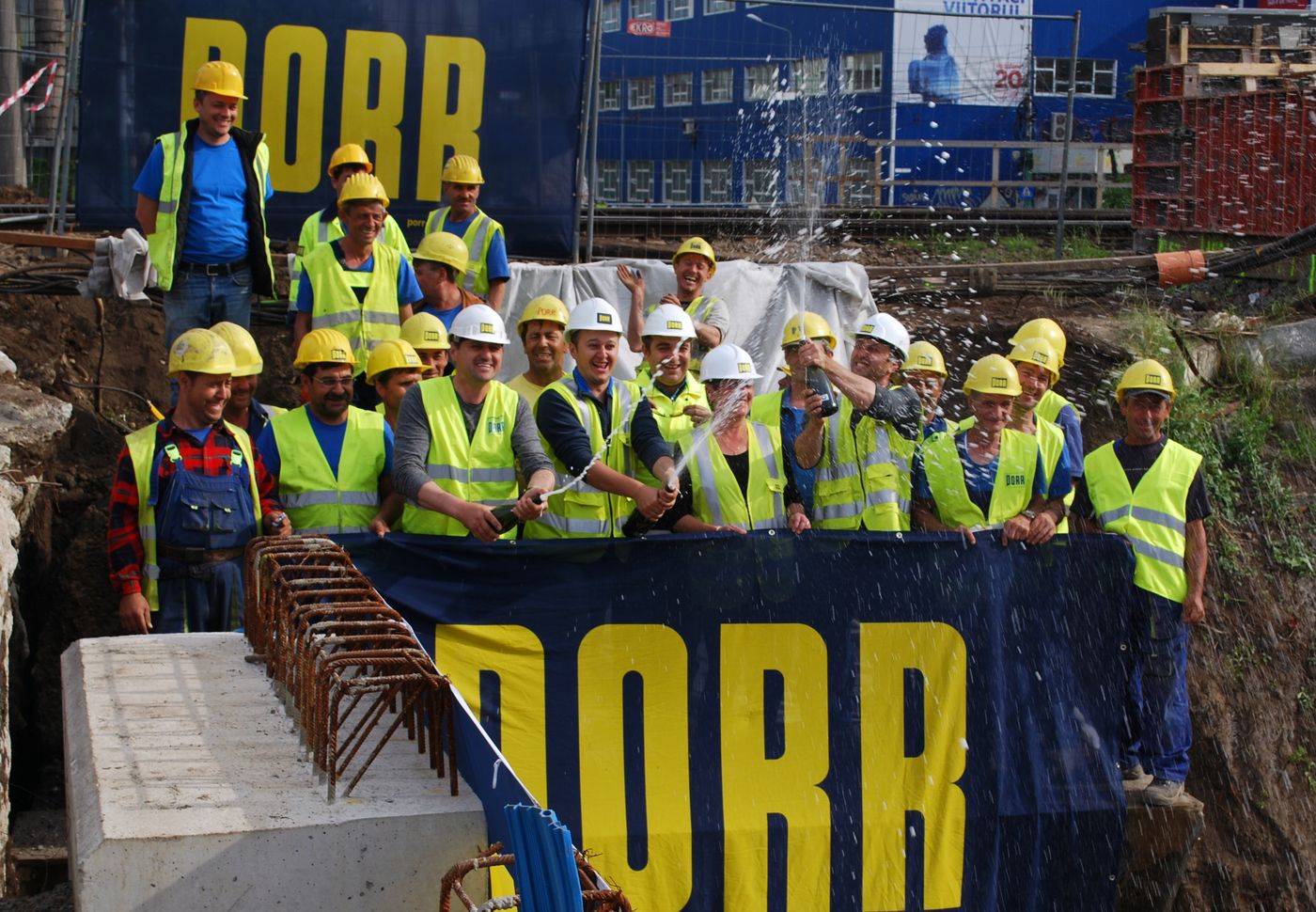 Our job is done here.

Closing ceremony after a demanding but successful 17-month project